You are here: home » news » signplot is first for the new tsrgd

SignPlot is first for the new TSRGD

Version 3.3 issued today provides the facilites needed for all the new signs. 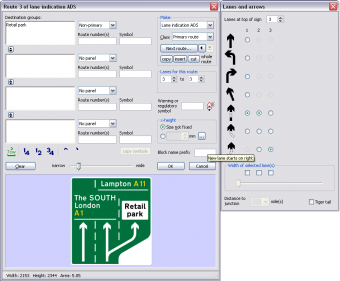 A simple way to make a complex lane indication sign

New signing rules that come into force next week are now supported by software. An updated version of SignPlot from Buchanan Computing is now available to help sign designers master the changes.

Simon Morgan, Chairman of Buchanan Computing, comments: “two aspects of the new rules were particularly challenging to implement in software. Parking plates have traditionally been specified by their TSRGD diagram number. But these numbers no longer exist and the options permitted are now much wider. We therefore developed a new tool to create these signs in the same way as in the regulations – choosing first the background colour, then from a list of applicable symbols and finally the text, restricting the choice at each stage to what is compatible with the sign so far. We had to enable other ‘types of user’ (as TSRGD calls them) to be added and further panels to be attached, either side-by-side or in columns, all from simple dialogues. We have kept as close as possible to the concepts and terminology used in the regulations themselves, including providing easy access to the ‘permitted expressions’ (in Welsh, as well as English!)

“Even greater innovation was needed for new types of directional sign. ‘Tiger tails’ have become a familiar sight at motorway junctions where a high exit flow merits providing two separate points at which traffic can leave the main line. But the signing for these has only now become prescribed, along with signs that show lanes dividing or that a particular lane can be used for more than one route. We took the approach that even these quite complex signs were amenable to being described in simple dialogues, saving designers being concerned with dimensions and allowing them to concentrate on achieving the clearest and most compact layout. We think we have achieved this, but as always will leave it to our users to judge and to feed back their ideas for further improvement.”

SignPlot 3.30 is now ready to be downloaded from our website user area by those with current support contracts.