You are here: home » news » new release of collisonmap

A free interactive map, CollisionMap, has been launched at https://CollisionMap.uk showing road safety data across Britain. It has been enhanced and updated to incorporate 2019 collision data that has recently been released by the Department for Transport (DfT). As well as plotting all collisions dating back to the beginning of 2011, the map allows users to examine the data by region, council area and postcode and to compare figures for 2018 with 2019. Figures can be compared for individual councils against others in the same region, and users can input the first part of a postcode to compare it to the national picture. Uniquely, CollisionMap also adjusts the collision data according to population. This means that users can more accurately compare their own location with others or with the national picture. 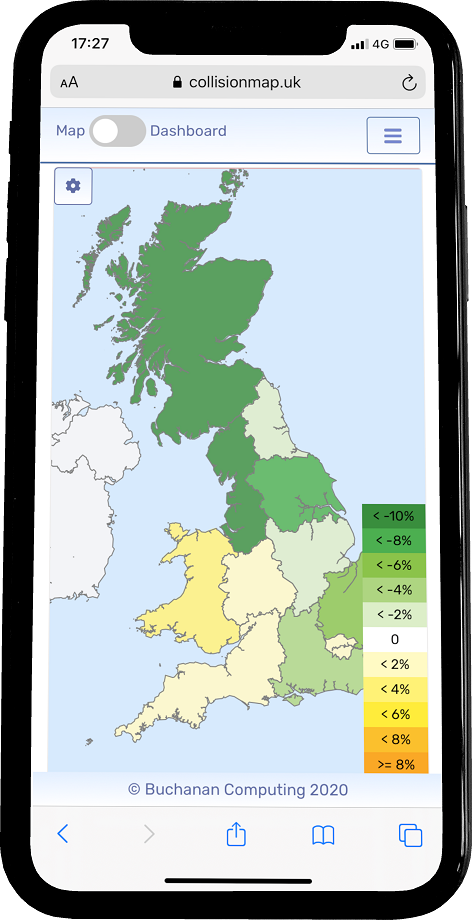 The map has been created by Buchanan Computing, a company that specialises in web mapping  and software for traffic engineering and highway management.

Alex Smith, Managing Director of Buchanan Computing explains why the company created the map: “Maintaining road safety is an important issue. There are severe financial pressures on local government, meaning authorities can’t always devote the necessary funding to road safety. By allowing the public free access to CollisionMap, we feel we are playing a part by providing the information they need that allows them to engage with local authorities on road safety matters.”

He continues, “What is unique to CollisionMap is that we’ve incorporated the facility for the public to see how they compare adjusted for population levels as well as the road length in their area. So, everyone can see if they are in a postcode that has good road safety and also check how their local authority stands compared to others.” 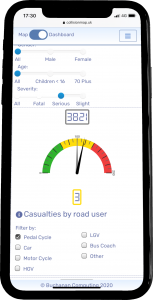 When searching by postcode district – for example, LS6 - you access a map of the location of its 2019 collisions. These are colour coded by severity. The map data can be refined between any two dates within the last nine years (2011 - 2019), or expanded to show different heat maps, such as: the collision percentage change from 2018 to 2019; fatal collisions per million of population. There are also filters to select results based on the severity of the collision. On the right of the page, a series of selections allow you to filter your search results further: you can select road users by gender, age, and severity as well as filter for casualties by road user or class. The interactive gauges change with the selections and compare the selected postcode with the national level (for 2019), letting users know whether the situation in the chosen area is better or worse than the national one. For example, cyclist casualties in LS6 were worse (higher) than the national level, but for the same postcode district, casualties in cars were better (lower) than the national rate.

Are you in a postcode that has good road safety? Go to https://CollisionMap.uk to find out.