SignLoad is a program intended for non-specialists to design steel sign supports quickly and easily. 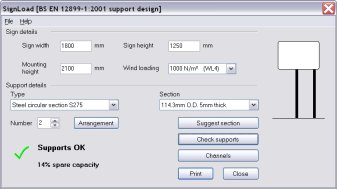 SignLoad Designer is a structural calculation program from SignPlot 2, the well known traffic sign design system. It implements the Eurocodes BS EN 12899-1 and BS EN 1991-1-4, using the recommendations in the related UK National Annexes that are about to be published.

SignLoad is a fully functional program intended for non-specialists to design steel sign supports quickly and easily. It works with any version of Windows and illustrates the chosen arrangement, which can also be printed. In addition to being the first software to implement the new Eurocodes, it is believed to be the first to cover asymmetrical post arrangements. An enhanced version that adds passively safe posts and channel section spacing for a variety of sign substrates is also available.

BS EN 12899-1:2001 is the current UK standard for specifying traffic signs. The previous standard, BS 873, was withdrawn at the start of 2006. A National Annex was published in October 2006, but is widely thought to be unduly conservative and result in sign supports being oversized. A revised National Annex is therefore in the course of preparation and expected to be published in April 2007. It is this revised annex that is used in SignLoad.

BS EN 1991-1-4:2005 is the wind loading standard referred to in BS EN 12899-1 and is part of Eurocode 1. Its National Annex (still in draft) includes a wind map showing how wind speed varies significantly across the UK.